Where we support South Africa

KwaZulu-Natal is the most populous province in the Eastern part of South Africa. It borders Swaziland, Mozambique and Mpumalanga in the North, the Eastern Cape in the South, Lesotho and Freestate in the West and the Indian Ocean in the East.
The province was established in 1994 by the amalgamation of the former homeland KwaZulu and the former province Natal. It comprises the traditional settlement area of the Zulu people and is the only province bearing the name of an ethnic group.

In this area, the HIV/AIDS infection rate is at 40 percent, the highest throughout the country. AIDS particularly affects the working age generation. Elderly people and children are left behind.

“Kindernothilfe” started a project together with the partner organisation Thandanani Children’s Foundation in the communities of Msunduzi (Pietermaritzburg) and Richmond offering a new home to 1,800 AIDS orphans. 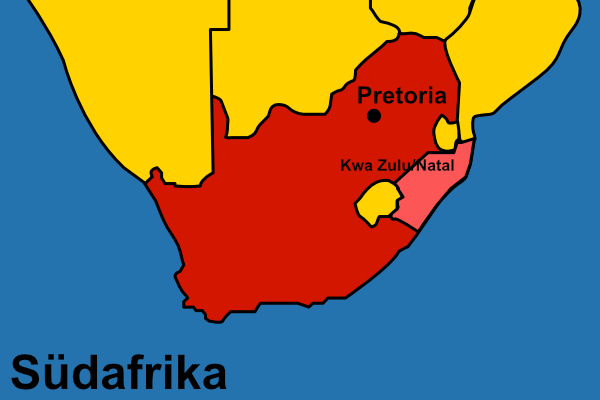 What happens in the Thandanani Project

Thandanani – Community Based Care for orphans and endangered children
Thandanani Children's Foundation was founded in 1989 and its mission is to support orphans and other endangered children in the province of KwaZulu-Natal. Children being directly or indirectly affected by HIV/AIDS are being particularly considered. The objective is to enable the communities to take care of those children themselves.

For this purpose, Thandanani has developed a model in which teams of volunteers that are positioned inside the community take care of the integrated development of the children. The children’s well-being as to material, physical, cognitive and emotional requirements is to be enhanced and their basic needs are to be satisfied. 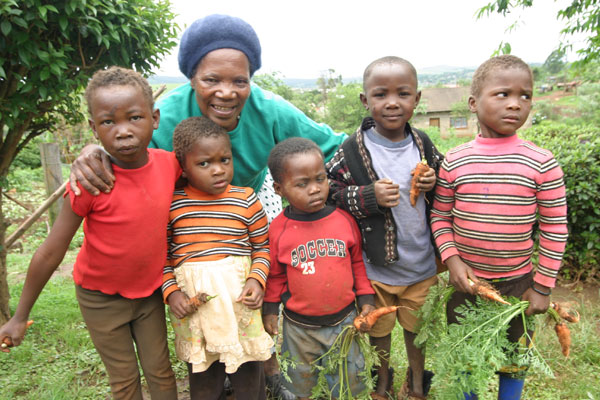 Who Thandanani’s help is for

Children families, grandparents and relatives in need
Many children families can only survive provisionally. All of a sudden, the eldest have to assume responsibility for their younger brothers and sisters. And this even though the girls and boys that have been left behind are often severely traumatised.

It is difficult for relatives and neighbours to house orphan children. There are hardly enough resources for their own families. Even fourteen years after the end of apartheid, large sections of the South African population live in poverty. The country’s unemployment rate is elevated and the spreading of HIV/AIDS makes the situation even worse.

Helping to help themselves

Volunteers are being instructed and that way they get paid jobs themselves
114 volunteers are already in action, one of them is Agnes. She recounts: “Once a week I visit some families. I help them in applying for state subsidy, I distribute food and show them how to grow fruit and vegetables.”

But there is more to it: The project ensures regular medical care for the children, explains about HIV/AIDS, sends the youngest ones to nurseries and the elder ones to school. Agnes: “Thandanani pays the school fees, provides learning material and school uniforms.”. The young woman is proud of her work. She is convinced of the project: “We get regular training and work closely together with the public schools, nurseries, authorities and health centres. This is what makes the project so successful.”

Report on the Thandanani project

Kindernothilfe's magazine portrays in its issue 2.2021, how the Thandanani project works and lets the supported families have their say.

Read the Kindernothilfe article on Thandanani 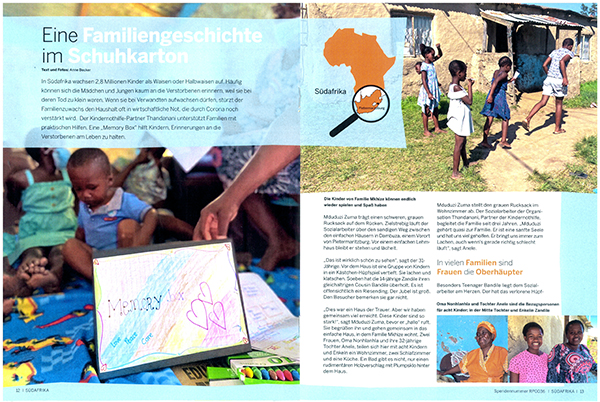