Birkenfeld, September 1, 2016. Ms Montserrat Casals Freixas has signifi-cantly facilitated Ferdinand Eisele GmbH’s overseas success with her tal-ent for languages and her sales skills for about 20 years. Since early September the labelling and identification technology specialist from Birkenfeld near Pforzheim has to allocate export sales to other shoulders now: Ms Casals Freixas retires and Ms Carla Herrera-Stanitzki will be her successor.

Born in Barcelona and based in Pforzheim since 1974, Ms Casals Freixas of course masters German perfectly besides Catalan, the language of her home region of Catalonia, and Castellano, the classic Spanish. In addition, however, she also speaks four more languages fluently, namely English, French, Italian and Portuguese.

Equipped with these language skills, she joined the Ferdinand Eisele GmbH sales team as a part-time employee in 1997. Since the early 90s ...

more pictures in the folder at 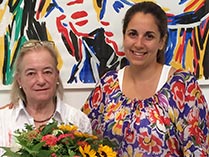 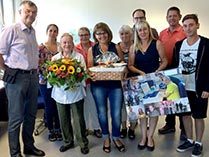